The above production's Books and Lyrics are written by Burton Wolfe; Music and Orchestrations are by Scott Gehman. Lyric Translations from English to Mandarin Chinese for The Sorcerer’s Apprentice,  The Legend of Yin and Yang and Metropolis by Lawrence Wong. 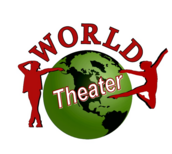 A series of Children’s Theater performances will be produced on the World Theater stage each season. Student Field Trips will be coordinated with our local school  districts. Study Guides related to the show content will be available to teachers and students. All productions will be dedicated to include good values and positive messages.